This one hails from the late, great author and success coach, Foster Hibbard.

It’s the best example I’ve ever seen of how one story can change anyone’s state.

[dropcap]T[/dropcap]here was a young man who owned a manufacturing business. He had taken it over from predecessors.

The machines were just about worn out and kept breaking down. He was running into enormous financial difficulties, just barely able to meet the payroll.

And then one day, that was it.

The bills kept piling up and he felt suffocated. He felt as though it was an avalanche of bills that never stopped and only got larger. For a moment he felt as though he couldn’t breathe with the constriction of bonds around his chest – the bonds of debt. 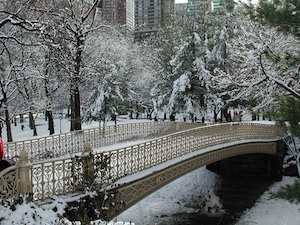 Then came Christmas, and there was no bonus for any of the employees, he just barely made the payroll. He had nothing left over for himself and his family for Christmas.

That Christmas Eve, he walked home. He couldn’t buy a tree, but his kids had found one. And it was decorated in a half-hearted manner, with the best they could. And he said to his wife, “I can’t stand it any longer, I’ve got to get some fresh air. Do you mind if I go for a walk?”

They lived right near Central Park and he walked out into the park, into the darkness. He shortly came to a little pond over which there was a wooden arch that bridged the water, and he thought, as he stood on that wooden arch:

“I am worthless. I have no net worth, but I have a lot of insurance. Yes and it’s double-indemnity accident. If this rail I’m leaning against were to break… double indemnity.” And he started leaning heavily upon the rail, and backing up and pushing, and it started to give. And suddenly from out of the darkness…

“Hey, you there! I see what you’re doing!” He pulled away and wheeled around.

Coming out of the shadows, this very elderly man said, “This is Christmas Eve, what do you think you’re doing?” And he poured it all out to the stranger, sort of like he was a father to him.

“Haven’t you ever heard of faith?”

And the factory owner replied, “Please. Don’t talk to me about faith! That isn’t going to help at this particular moment — faith.”

And the man said, “All right, I’ll show you what faith is. Obviously you don’t recognize me — I’m John D. Rockefeller.” And he reached in his pocket and pulled out a checkbook. And he wrote a check to the young man for one million dollars.

The factory owner went back to his apartment, where his family was, and he was floating! He had a million dollars from John D. Rockefeller. Within a week or so, with his new attitude and enthusiasm, things started happening around the business — and within two weeks his creditors came to him.

They said, “We’ve had a big meeting, we realize that you are so deep into us that there’s no conceivable way you can ever pay off what you owe us. But you’ve got nothing that’s worth anything to us to foreclose on. So we’ve talked it over and we decided that if you had good equipment in here, you could really start making some money to pay us off. So we’re loaning you enough money, in addition to what you already owe us, to put in some new equipment.”

Word got out rapidly and big orders started coming in. He made a bundle in the next twelve months. He couldn’t wait for Christmas Eve.

The formerly despondent factory owner went back in Central Park a year later. He’s there, wandering around the same general area, in the dark, looking for John D. Rockefeller — surely he remembered — maybe he was tied up in other family affairs and so forth?

He approached him and began pouring the whole story out of what had happened in the past twelve months,  and he said, “Just as you said sir, I didn’t have to cash it!”

The old man backed away and said, “I don’t know who you are, I’m not John D. Rockefeller, and I’m surprised you don’t recognize me – I am Andrew Mellon. Please let me alone.”

Startled, he said, “But I’m sure you were Mr. Rockefeller! We were right here on the bridge!” And suddenly another figure came out of the darkness, down the path. She was a nurse, with a black nurse’s cape, and she said, “Thank God, there you are, sir. I thought I’d lost you. Young man, is he bothering you? I hope he hasn’t bothered you. He keeps going around telling everybody he’s John D. Rockefeller or Andrew Mellon, and writing big checks and giving them away.”

This one had a huge impact on me at the particular time I first read it. It certainly changed my state.

As Foster commented: “What is a check? Nothing but a piece of paper. It has an amount that you put on it, a date, and once you sign it, it says “I stand behind that. I have faith in that signature. I trust that.” So that piece of paper that sat in the vault for twelve months was totally useless. Or was it? It couldn’t be cashed because there was no money behind it, but was it worthless?”

And on the topic of stories and story selling, you’ll be privy to a treasure trove of the greatest “story selling” ads that have sold HUNDREDS of millions worth of product.

It’s all part of the new “Case Studies in Cash Creation” for marketers and copywriters.  Check it out and save a small bundle during this special launch offer.