Likewise, this 46-page bookalog can teach you more about “Story Selling” than all the topical books on Amazon combined.

And if I ever had to rely on the selling power of one ad, I’d cast my lot with “story selling.”

This bookalog began mailing in late 2017 and is still going STRONG in mid 2018. 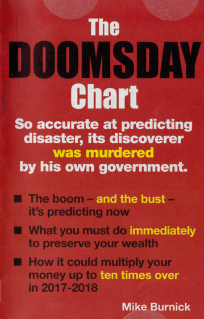 So if anyone ever tells you financial advertising is BORING, show them this bookalog. Because with juicy chapters like “Why Stalin murdered Nicolai Kondratieff,” this is anything but!

There’s nothing like a good cloak and dagger story to hook your prospect from the get-go.

This bookalog is a lesson in turning an often sedate topic — investing — into an EXCITING read with story selling.

You can download the ad in PDF: The Doomsday Chart

“In the predawn hours of September 17, 1938, at the Kommunarka firing range near Moscow, a slight, bookish-looking man was marched out of his cell.

His name was Nikolai. He was an economist. And as he faced the firing squad, he was informed that his death had been personally ordered by the Soviet Union’s supreme leader, Josef Stalin.

Nikolai’s crime: The discovery of a cyclical pattern in global economies that had accurately predicted the rise and fall of empires and nations for centuries.

The problem was, his chart pattern also predicted the death of the Soviet Union. And in 1930s Russia, that was enough to get you killed.

Today, this obscure economist’s name lives on as the father of the most accurate economic forecasting tool known to science.”

BEST VALUE: A LIFETIME of Real Wealth Report for just $197 – I SAVE $1,783! I get it all, forever. I’ll never miss a single issue or recommendation. I’ll never see a price increase or even a renewal notice. And I’ll get all SEVEN bonus reports – a total of $553 in valuable bonuses, FREE!”

Take a lesson from this mailbox hit. There’s no product or service that can’t be spruced up with a captivating story.

Yours for bolder response,