“In the early 70s, Mel Martin was hired as a copywriter by Herb Nagourney, the toothy publisher of The New York Times book division whose business was built on running coupon ads in unsold space in the Times. While there, Martin created what Edelston considered to be some of the greatest book advertising ever written. “I would love to go through the Times on microfiche and find those ads,” Edelston says. “Each was masterpiece.”

I’ll never forget the night I read that passage.

It was after midnight… but I thought:

So I dug into the databases.

These ads aren’t something  you’d find in a normal search engine query. Not by a long shot.

I was fourteen years late to the party — from when the article was originally published — but what the heck?

I’d found the first one. Then the second and third. By the time I’d finished at close to 3:00 am, I’d rounded up dozens of them.

Now it was time to read them!

I stayed up another few hours going through each and every ad.

They were everything Marty Edelston said they were… and more!

And heck, since Marty started a company from a basement desk wedged next to a furnace… and turned it into a $150 million enterprise… who was I to argue?

My next step was clear.

I caught a few hours sleep, then headed over to the copy shop to get the ads printed. Next, I grabbed Marty’s address in Connecticut and had the batch shipped to him, along with a brief cover letter.

A week or so later, I was struck by a bolt from the blue when I went to my mailbox.

Mel Martin’s advertising is still the gift that keeps on giving.

For example, even rookie writers can be successful selling products along the Money-Power-Love axis.

If you can even half-convince your prospect that your product will give her a greater supply of these, then she’s yours.

But it takes a TRUE talent to write an ad that pulls for: 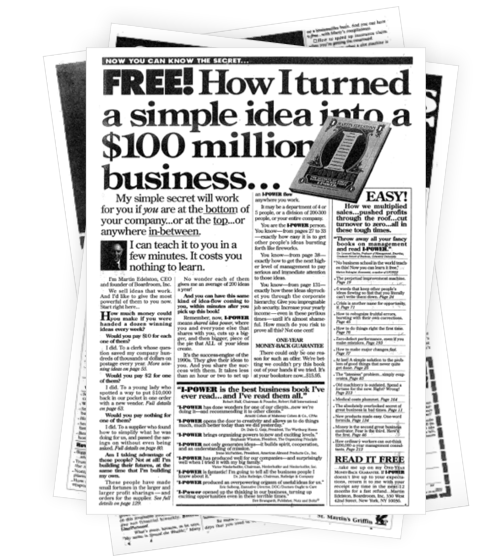 Mel’s fascination laden copy is so compelling, he takes what’s normally as exciting as watching grass grow and turns it into an  absorbing, profit-pulling adventure.

Here are the ads mentioned in the video.

And if you REALLY want to dig into the lot of Mel Martin’s legendary ads: 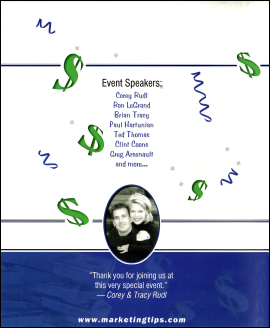 Seminar Blast from the Past 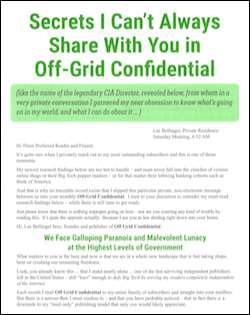